Well, hello. I'm back and suddenly I can enter my blog, sigh. Been trying on and off since last December. I have finished all the book learning and am working on finishing the 60 shifts I have to take at the hospital in next town. I started mid January and will hopefully finish by mid April. Drats, just checked the calendar and I will most likely not finish the shifts until end of April or beginning of May. Sigh. I am so ready to be finished with this school thing. Graduation will be late May, don't remember the exact date though. And I have told anyone who is (or isn't) interested that I will never learn anything, ever again, unless it's quilt related. By the way, I will graduate as bachelor (think that's the word) and nurse aid. 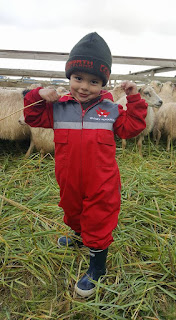 Look at this beautiful boy, the photo was taken in the autumn of 2016. 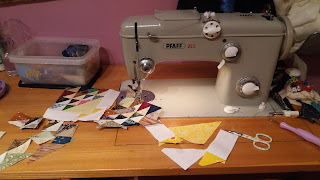 Found out in December that this darling machine was actually fixed (the straight stitch) few years back when the repairman told me it was to expensive to fix all that is broken in and outside of it. 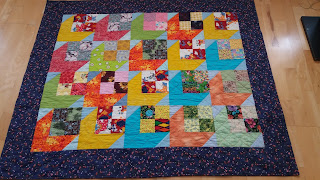 One of the quilts I finished while in exile (at school). Blocks came from friends in USA. We were in a group together on Yahoo. The quilt went to charity. 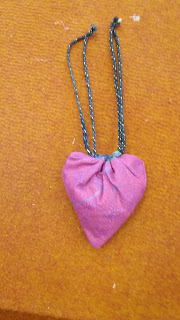 I went to a retreat as usual in October and oversaw teaching sewing this shopping bag, it went, along with another one to nurse aids at an ICU in a hospital in the city. They were my teachers when I took 15 shifts there last spring and I thought the bags would be nice thank you gifts. 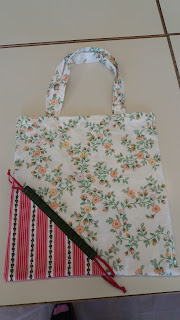 A bag from another lady at our retreat, just to show you how they look out of the heart (corner). 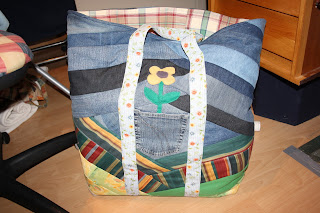 And lastly, one of two bags I made to carry my sewing machine too meetings. It's very thick, with two layers of batting and the fabric is also very thick. The idea of the flower in the pocket is from Rachael at https://bluemountaindaisy.blogspot.is but the design of the bag is wholly mine. It won second price at a quilt show in the city a few years back and I was quite happy until I saw in the quilt magazine that I won third price. Hm..... I was told by more than one person connected to the show that I won second price and I actually got the reward for the second price. What ever, I'm happy with the bags and use them a lot, one is bigger than the other so I can easily choose which sewing machine will go with me to sewing days.

Speaking of sewing machines, I am really trying not to become a hoarder, but it's hard. I need to make a new post about my sewing machines. The plan is to be more active in blog writing. But that's all for now, it's after midnight and I need my sleep. I had a night shift few days ago and it's taking time getting back to normal routine. Thankfully, this will be the only night shift, I'm not very good with the night shifts, while doing the 20 shifts at the nursing home two years ago I took more night shifts and I'm just to old for them. Good thing I will turn 55 next autumn as nurse aids 55 and older don't have to do them. Lucky me.😊
Sunna
Posted by Sunna Reyr at 4:55 PM